Touches - I speak with my mouth shut 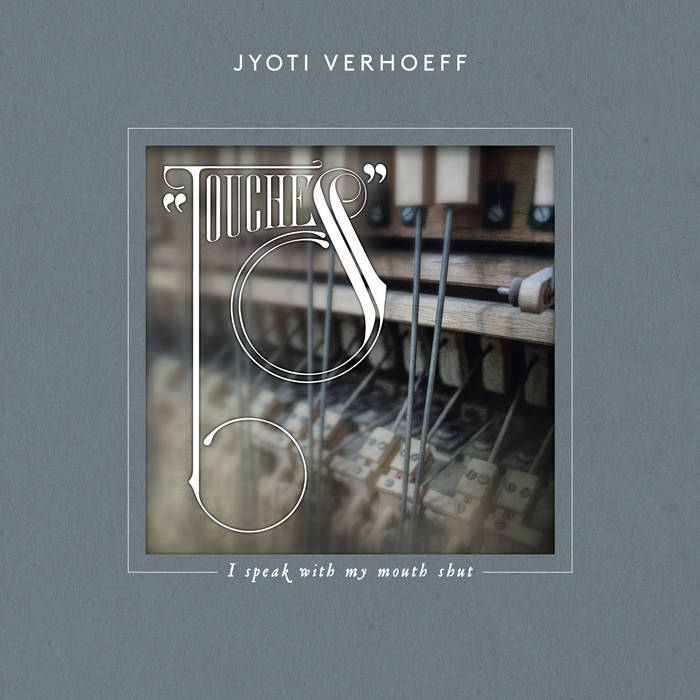 Touches – ‘I Speak With My Mouth Shut’, the highly anticipated f4th album from Jyoti Verhoeff was officially released on all digital platforms September/2018 via her label, Friendly Folk Records. The official CD Release Party will took place on 27/October/2018 at Slotkapel Egmond located at Slotweg 19, Egmond aan den Hoef, Netherlands.

Creation of composer Jyoti Verhoeff and producer and sound engineer Fieke van den Hurk, this album has taken progressive rock and folk genres to an entirely new level. Touches is an instrumental concept album that dares the listener to question the process of communication; the value we place on written and spoken words. Over time we have traded the magic of reading the truth in someone’s eyes, observing body language, and following our intuition, in exchange for empty and often meaningless words. Touches carries with each note the strong message of conscious silence. Each track on Touches is a neo-classical experiment in delicate symbiosis with modern techniques. A carefully balanced search for pure acoustic sound where one note can grow up into many worlds. Focus on each title, feel the vibration and energy as you receive the unspoken words of Touches – ‘I speak with my mouth shut’.

Recorded at the inspiring studio, The Church, where a variety of key instruments were available (spinet, celesta, clavier-accordion, etc.), the composition’s primary instrument is a grand piano. Although each track was recorded on an acoustic keyboard instrument, there was room allowed for distortion of the sound by exploring the grand piano with drumsticks, horse hair, tapping the strings, and using metal on the strings for special sound effects. In addition, unique microphone settings and a touch of modern technology changed the acoustic sound into an electronic feel. The album will be accompanied with a notebook containing scores for piano, including extra songs: Field of Night, Elisa’s Laughter and Stones. Touches-'I speak with my mouth shut' is an instrumental masterpiece that touches the heart and soul.


About the Artist:
The music of Jyoti Verhoeff is both intriguing and enchanting, almost cinematic in nature – with its many layers, endless amount of subtleties, and organic structures. The artist was born with a visual impairment and grew up listening to the world. As a result, she developed a heightened sense of hearing that brings detailed accuracy of every note to life. Perhaps this is why the music of Jyoti is always authentic and extraordinary.
Balancing on the edge of the unknown, where nothing is predictable, yet everything is recognizable Touches will deliver dark, dreamy sounds that lure you into the deep, and welcome you into the artist’s land of imagination. Her music crosses over to many progressive genres, from Neo-Progressive Rock to Neo-Classic Cinematic Fantasy Folk though she is most often placed alongside similar artists such as: Phillip Glass, Nils Frahm, Ólafur Arnalds, Yann Tiersen, Agnes Obel, Enya, and Eivor to name a few.


Previous Accomplishments:
Since the release of her debut EP, Phoenix (2012) Jyoti had a strong presence, selling out the debut show in the Melkweg, Amsterdam venue, and making it to the finals of Grote Prijs van Nederland competition (2013). With release of her album Riven – Full Moon, Dark Moon, (2014) the artist had found her place in both the alternative rock and progressive folk genre scenes. Many accomplishments surrounded this double album, which was recorded at Wisseloord Studio (Hilversum, Netherlands), and mastered by Grammy Award winner, Darcy Proper. The CD Release was performed to a sold out Paradiso (Amsterdam, Netherlands) where Jyoti was accompanied by her cellist, the Symphony Orchestra Middle Holland, and a full choir, under the direction of Ghislain Bellefroid. Jyoti and with her cellist (Maya Fridman) toured with folk icons FAUN, and several songs from the album were used for film: ‘De Nieuwe Wildernis - In Dialoog met de Natuur’ (narrated by astronaut, André Kuipers, who received first copy of Riven-Full Moon, Dark Moon). Jyoti’s second album Bare (2016) was met with enthusiasm at sold out venues across Europe.